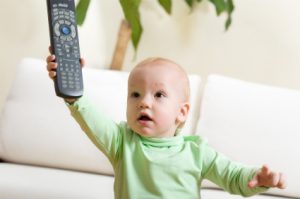 In 1999 the American Academy of Pediatrics issued a policy statement about television viewing for children. This policy delineated the benefits that TV can have as well as the developmental risks that it can pose to children, especially those under the age of two.

“Pediatricians should urge parents to avoid television viewing for children under the age of 2 years. Although certain television programs may be promoted to this age group, research on early brain development shows that babies and toddlers have a critical need for direct interactions with parents and other significant caregivers (eg, child care providers) for healthy brain growth and the development of appropriate social, emotional, and cognitive skills. Therefore, exposing such young children to television programs should be discouraged.”

However, in 2009 the American Academy of Pediatrics published a prospective study “Television Viewing in Infancy and Child Cognition at 3 Years of Age in a US Cohort” (Schmidt, Rich, Rifas-Shiman & Oken). The conclusion was “…TV viewing between birth and 2 years of age was neither beneficial nor deleterious to child cognitive and language abilities at 3 years of age.” However, they also said “…The potential benefits of limiting exposure to TV in early childhood are multiple and include less exposure to violent media content, improved diet quality, lower risk of overweight and obesity, lower risk of attention problems, and improved sleep quality.” They also stated more research is needed.

So what is a parent to do? At Baron Therapy Services, LLC we like to take the golden road…that is, the middle road. Too much of anything can be bad, and on the flip side – not enough can be detrimental as well. Allow your child to watch TV on a limited basis, and choose programming carefully! There are many educational programs that at least appear to help with child development. Despite that, be on the safe side and try to keep viewing time down to approximately one hour per day.